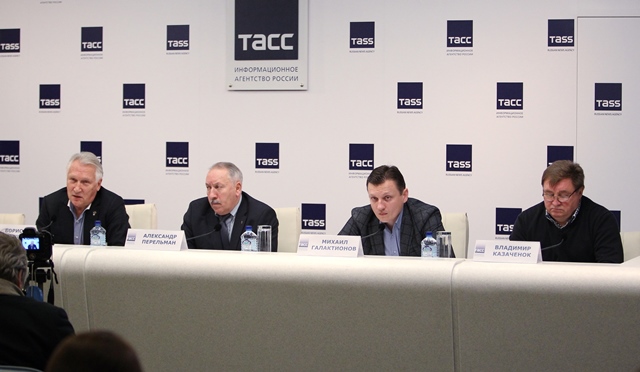 Boris Vakhrushev, the First Vice-President of the Interregional Union of Football Federations “North-West”, also highlighted the significance of the tournament, emphasizing that every year a new artificial grass pitch from Moscow is installed in the Sports and Concert Complex and further is kept in Saint Petersburg:

- We were celebrating the 300th anniversary of the city in 2003, and the Football Union of Russia gave us a high quality football “carpet” as a gift for the event. Following the tournament, the pitch was transferred and “laid” on the “Petrovsky” Small Sporting Arena. This has become a tradition ever since. Every year after the Granatkin Memorial, the grass is further given to football schools – to the “Dynamo” stadium, “Lokomotiv” and “Moskovskaya Zastava” arenas to name a few.

Mikhail Galaktionov, the Youth Russian National team Head Coach, thanked the organizers for the invitation and noticed that the tournament would help to discover new names for the National team and would create internal competition within the team:

- We are starting training sessions in one of sports complexes in Moscow on Tuesday. I made a decision not to invite key players as they had already dedicated much time to the team throughout this year that influenced their physical and psychological condition. I would like to thank Vladimir Kazachenok for the Zenit Academy players are the key in the team. They are always disciplined and treat their duties in a quality manner. We are in close contact with the Academy and the coaching staff. And we hope to continue this cooperation.

- We shall try to show such a game that the health of Saint Petersburg citizens would only become better. Saint Petersburg team is always playing on a good level and we would like to keep this trend. We might not have a vast choice of players as the other teams, but we shall give a fight. Our team will mostly consist of “Zenit” School and the Academy footballers, and we shall have three-four players from the city teams.

Dmitry Shneider, the Tournament Director, is expecting a lot of spectators, especially in case the Russian National team or Saint Petersburg team advance far in the tournament:

- The Football Union of Russia decided to keep the pricing policy: 300 roubles a full price ticket, 150 roubles a privileged price ticket, 50 roubles for schoolchildren. Let me also note that we are following the trends. Tightened security measures will be taken during the tournament without exceptions. Online electronic match reports will be available for the fans, experts and the media – the official website will instantly show updates from each game. We shall also have dedicated mobile apps for the Granatkin Memorial and the Commonwealth Cup. Everyone will be able to follow matches online which, however, is not a reason not to show up for the games in person. The website will be showing live video broadcasts and we’ll do our best to create match highlights and reviews. We cannot influence the quality level of the teams play, but we can provide all the rest.

Audio and video recording of the press-conference: