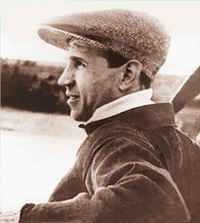 The Goalkeeper who became the first FIFA Vice-President Valentin Granatkin is a big person in the history of Russian sport. Not only as a talented sportsman, but also as a greatest organizer of the sports movement.

Future goalkeeper of USSR National team was born in the 16th of July 1908 in Bronnitsky district of Moscow region. At age of 15 he started appearing in the goal of Moscow side “Krasniy Luch”, later – in “Serp i Molot”, “Elektrozavod”, “Lokomotiv”. As a player of team Moscow Valentin Granatkin became Soviet Champion in 1932. With USSR National team he played against teams of Norway, Sweden, Turkey, and as “Lokomotiv” player he won the first Cup of USSR.

At winters, Granatkin changed ball for ice skates and played Russian hockey for teams of Moscow, national teams of Russia and USSR. He was one of the best goalies of preWWII times. There was no other goalkeeper, who played in Soviet national team for both football and Russian hockey. In the first Russian hockey Championship of Soviet Union, Granatkin, aged 38 at that time, played for “Spartak” (Moscow) and won bronze medal.

Since 1943 Valentin Granatkin started working as an instructor for Communist Party Propaganda section., since 1969 – as a Chairman of the Moscow sports committee, since 1955 – as a Deputy chairman of the Russian Sports Committee. The most of his ideas and energy went to improving Soviet football system.. At 1951-59 he was the Soviet football section chairman, and in 1959-1964 and 1968-1973 he was Chairman of Football Federation of USSR.

Also Valentin Granatkin gave a lot to the improving of Soviet football positions of an international scale. Since 1946 he was FIFA Vicepresident. Since 1955 till the end of his life – FIFA First Vicepresident, chairman on amateur football committee.

Granatkin passed away at the 2nd of November 1979, when final preparations for football tournament of the Olympic games in Moscow. To commemorate this man, about whom FIFA President Joao Havelange said “Unforgettable FIFA vicepresident, man, who was an example to all of us”, international youth football tournament is organized since 1981.